Behavioural synchronization in a multilevel society of feral horses

Behavioral synchronization in a complex society of feral horse

There are lots of successful studies in making behavioural models of animal groups with a simple social organization like bird flocks or fish school, but it is more challenging do it with animals who have a more complex society. A joint team from the Kyoto University and Strasbourg University showed that an hundredth of horses synchronized their behaviour using computational modelling.

Indeed, feral horses have a complex social structure, in which small stable unit groups aggregate into a larger social organization called “herd”. This is just like human families gather to form a local community, families further combine to form higher social organization levels such as suburbs, cities, states, and countries. Usually, such society is difficult to observe the macroscopic structure because the groups become quite huge and spread vast. Thus, there have been few studies on behavioural synchronization of such society, but the usage of drones enabled them to observe the spatial structure of the herd which consists of more than 100 horses at once.

First, researchers used drones to capture behaviours and relationships of feral horses in Serra D’Arga, Portugal, then they built multi-agent based models with different hypothetical rules: 1. Are individuals independent? 2. Do they just synchronize their behaviour with any individual? 3. Do they synchronize according to their social network? To test the third hypothesis, two sub-models were created, (a) one only takes into an account of the same unit group members, and (b) one cares about the all unit groups in a herd.

Comparing the simulation and the empirical data, the hypothesis 3(b) was supported. The result suggested that horses coordinate with other individuals not only within a unit group but also at an inter-unit- group level. The study showed that it is possible to simulate the behavioural synchronization of animals living in one of the most complex societies using a model with simple rules integrating social relationships.

Surprisingly, inter-individual interaction occurred among spatially separated individuals as well. Most previous studies have suggested that animals synchronize the behaviour of only a few individuals nearby, and such local interaction creates the global synchronization. However, in horses, the average nearest unit distance was 39.3m while the nearest individual within the same unit was 3.2m. The result suggests that horses may have developed an ability to recognize the behaviour of horses even if they were quite apart. As our model is applicable to other animal groups, this study on collective synchronization will contribute to an understanding of the evolution and functional significance of complex animal societies. 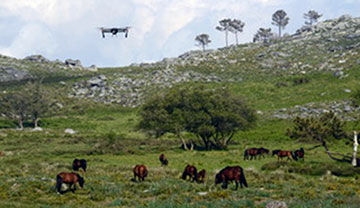 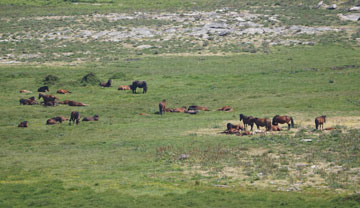 Figure 2. In the left picture, most of the horses in a multiple units are foraging, while in the right, there are 5 unit groups in the picture and most of the individuals are resting. (Photo taken by Shinya Yamamoto, and Satoshi Hirata).
Article Information
Maeda, T., Sueur, C., Hirata, S., & Yamamoto, S.(2021)Behavioural synchronization in a multilevel society of feral horses PLOS ONE, 16(10): e0258944. https://dx.doi.org/10.1371/journal.pone.0258944