Emerging Sciences for Wildlife and Culture in Bhutan

Welcome to the international symposium entitled “Emerging Sciences for Wildlife and Culture in Bhutan”. My name is Shigefumi MORI, Director-General of the Kyoto University Institute for Advanced Study. As a representative of Kyoto University, it is my great pleasure to welcome the delegates from the Royal University of Bhutan.

The relationship between the Royal Kingdom of Bhutan and Kyoto University started in 1957, almost 60 years ago, when Her Majesty Ashi Kesang Choeden Wangchuck, （アシ・ケザン・チョデン・ワンチュック）the Royal Grandmother, visited Kyoto. Her majesty was welcomed by two professors from Kyoto University, the late Takeo Kuwabara and Joji Ashida （桑原武夫と芦田譲治）. In the following year, 1958, Dr. Sasuke Nakao （中尾佐助）, a graduate of Kyoto University, stayed in Bhutan for about 6 months as the first Japanese scientist who visited Bhutan. Since then, there have been numerous interactions between Kyoto University and Bhutan in various domains. Diplomatic relations between Bhutan and Japan were established in 1986. This year, 2016, thus marks the 30th anniversary of official links between our countries.

To renew these close ties, Prof. Tetsuro Matsuzawa, Prof. Kozo Matsubayashi （松沢哲郎と松林公蔵）and other professors visited Bhutan in October 2010 and had the opportunity to meet His majesty the Fourth King. His majesty strongly encouraged them to promote friendship. Thus, the “Kyoto University Bhutan Friendship Program” was launched following His majesty’s encouragement. The program aims to build an equal-partnership of the two countries, Bhutan and Japan, through university activities of research, education and social outreach.

The international symposium today will act as another bridge strengthening the ties between the two universities. We very much hope that this symposium will provide great opportunities to exchange ideas, to promote mutual understanding, and to pass on our history of friendship to the next generation. 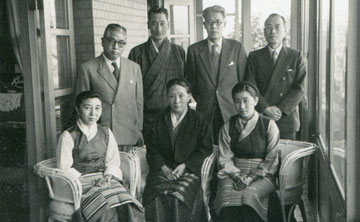 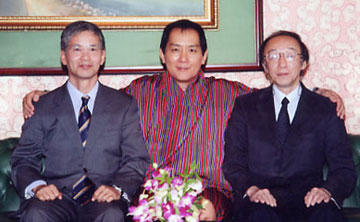 The 4th King of Bhutan
Jigme Singye Wangchuck (born 11 November 1955) was the King of Bhutan (Druk Gyalpo) from 1972 until his abdication in favour of his eldest son, Jigme Khesar Namgyel Wangchuck, in 2006. He is credited with many modern reforms in the country. He is known as the person who promoted the idea of “Gross National Happiness (GNH)”.
お使いのブラウザでJavaScriptを有効に設定して閲覧してください