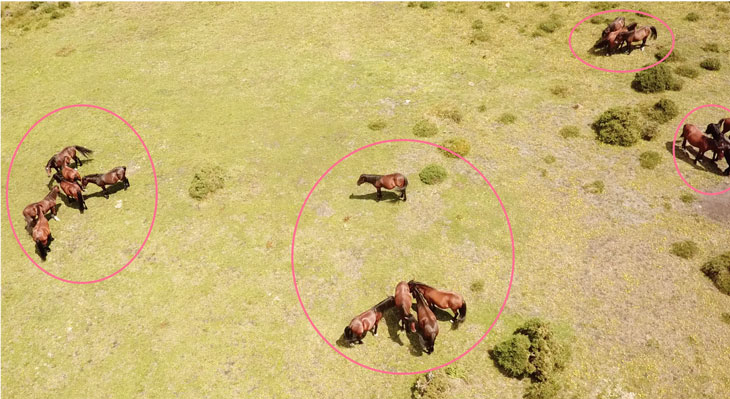 A picture of the part of horse herd. Each harem was circled (Photo taken by Tamao Maeda)

The aim of this study was to apply spatial association data obtained from drones to verify the presence of a multilevel structure in a feral horse society. We took aerial photos of individuals that appeared in pre-fixed areas and collected positional data in Serra D'Arga, Portugal. We took successive photographs of the horses present at the site at 30-minute intervals, and these photos were stitched into an orthomosaic, a geometrically correct aerial image composed of many individual still images. We successfully identified 121 individuals belong to 23 units (plus 5 solitary males). Units were categorized into two types, harems (mixed-sex group with one or two adult male/s) and bachelor group (all-male-unit).

The analysis found a bimodal structure of the inter-individuals distance distribution. Units were identified using an association index with a threshold around the first peak because the same unit members should maintain the distance around it, while those from different units are likely to avoid approaching that close and maintain the distance around the second peak. Inter-unit distances were significantly smaller than those in randomly replaced data, which showed that units associate to form a higher-level social organization or “herd".

Finally, network analysis revealed the spatial structure of the herd, where large harems were more likely to occupy the center than small harems and bachelor groups, which were instead on the periphery. In many social animals, dominant individuals often occupy the centre, thus our data suggests that the hierarchical relationship is between units and correlates with harem size. Bachelor's threat hypothesis argues that harems assemble to form coalitions to decrease the risk of harassment, especially infanticide, and harem takeover by bachelors, which is presumed to be the most plausible scenario for multilevel society evolution in plains zebras and Asian colobines. Our discoveries on the positional differences between harems and AMUs among units support the assumption that herd formation benefits harems via more effective protection from bachelors.

These three pieces of evidence regarding the existence of units, unit association, and stable positioning among units strongly indicated a multilevel structure in horse society. Our method of investigating multimodal association distributions, the subsequent null-model analysis and social network analysis could be applied to other populations and taxonomic groups to detect modular group structures with a minimum arbitrary definition. It contributes to understanding the functions and mechanisms of multilevel societies through comparisons with other social indices and models as well as cross-species comparisons in future studies.

Moreover, our observation method using drones enlightened a new utilization of drones applicable to various animal groups, not only to multilevel societies. Although drones have an advantage in recording the spatial position of large groups, individual identification has only been attempted in few studies and only with a small-sized group. Thus, most drone studies have focused on temporary social interactions and collective behaviour in behavioural ecology. Our study indicated a further potential of drones for the long-term monitoring of social associations by adding individual information on positional data. 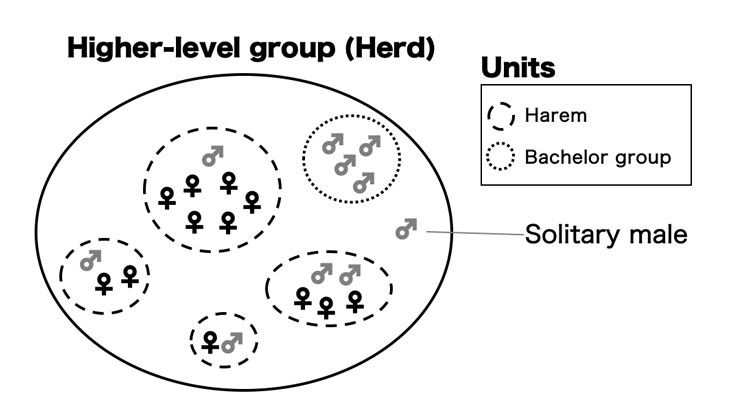 Figure1. The structure of horse society we investigated. It was quite similar to the society of Plains zebras and Przewalski's horses. 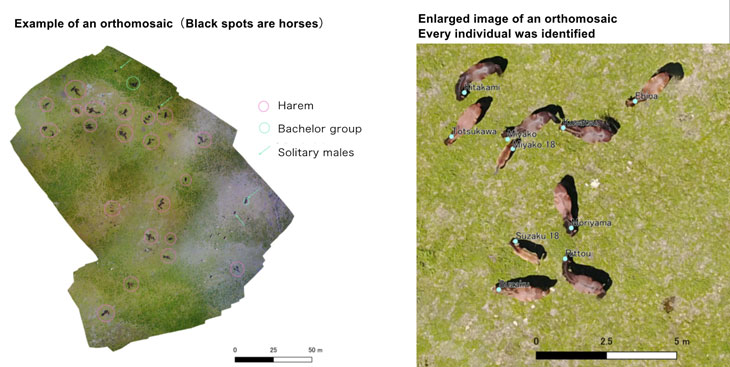